From the 13th to 16th of November, the Formnext Additive Manufacturing Industry Fair took place in Frankfurt, Germany, where 632 exhibitors from 32 nations and a total of 26,919 visitors gathered. It is the leading trade fair in Europe for the additive manufacturing (AM) industry, and focuses on the efficient production of products from design to finished parts.

The fair brought together all participants from the supply chain including service providers, printer manufacturers, suppliers of raw materials (metal powder, polymers, wires, etc.), research centers, and manufacturers of parts from AM technology. 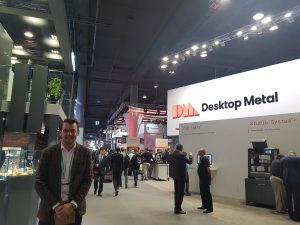 Simon Weimer from Metalshub at Formnext[/caption]

The Metalshub team was present at the fair, and took advantage of the opportunity to get a better idea of the most recent innovations of the AM industry.

First, more open system printers, in which printer manufacturers sell the equipment, and metal powder suppliers sell directly to customers are now offered. Ultimaker's Senior VP of Product Management, Paul Heiden said, “most of the competitors, the companies that produce 3D printers, have a closed material system. We, as Ultimaker, don’t like a closed material system, for many reasons: the price is too high; it locks you in; but most importantly, it denies the essential characterization of 3D printing, and it is the choice of materials that determine what part you want to build, and the properties.

Second, a new range of metal powders and materials were promoted such as carbon and glass reinforced nylon, and polyamide carbon fiber. Also promoted were nanocomposites, materials that incorporate nano-scale particles, offering drastic improvement in properties such as mechanical strength, heat resistance, and electrical and thermal conductivity.

Third, from the 3D printer manufacturer side, some improvements in terms of speed of printing have been introduced. Triditive, a Spanish 3D printer provider, presented AMCELL, an automated additive manufacturing system capable to produce up to 10 thousand parts per month. Triditive’s CEO Mariel Diaz stated, “our idea is to scale production, that is, produce about 10 thousand units per month, which is very important if we want to reduce the cost, and if we really want to implement this technology in the industry”. This reinforces the idea of how printing speed is a critical issue when considering mass production processes.

Certainly, these new developments will help accelerate mass production in the AM industry, and also this new progress will open up opportunities for new companies to enter this growing market.

Stay tuned to get more news about this exciting and emerging industry!